In 1930 this article featured in the Birkenhead News about the first headmaster at Mersey Park Primary School.Thank you to Mr Cecil White, who was a pupil during the 1920′s, for providing us with this photocopy of the press cutting. 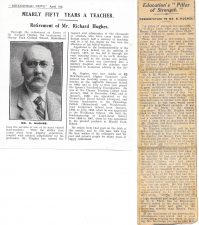 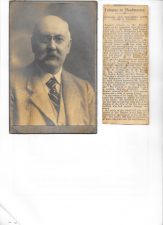 Mr Hughes- headmaster withdrawal letter. Thank you to the headmaster’s grandson (Alun L Hughes) for sending this information across. 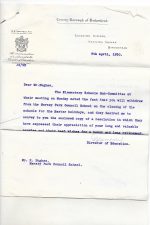 A photograph staged for the Press for headmaster retirement. Picture stamped on the back, ‘Allied Newspapers Ltd’

A photograph from 1930, including Headmaster Mr Richard Hughes and his wife to his right.

Extract from the minutes of proceedings of the elementary school sub-committee of 7th April, 1930. 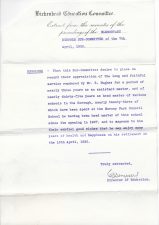 In 1931 this letter was received following a visit to the school acknowledging “Mr Foulkes, Miss Tart and the teachers are making good and lasting impressions on the children”. 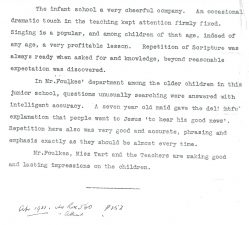