We have recently been contacted by Mark Critchley who wrote to say:
“I am just writing to say how grateful I am for the amazing education I received at Mersey Park School from about 1964 to 1970, when I left to start at Rock Ferry High.
The solid foundation I received in English and Maths in particular set me in good stead for further academic success in life. I now teach summer Academic English Language courses to foregin Masters students at The School of Management in Liverpool University, so using Mersey Park’s famous old grammar book entitled “First Aid to English’ (of which I still have an updated copy) cannot have done me anythiing but good!!  I have also had a good teaching career at Universities in China and Saudi Arabia (and elsewhere) on the strength of these fundamentals received whilst studying with you at Mersey Park.
Equally, it was the innovative approach of my then teacher Mr E Hooper who linked with a peer teacher from the 1960s Newtown of Genvilliers, Paris, and enthused me so much with the French language, that I also have a Bachelors degree in French… so this came about principally thanks to enjoying language lessons with him!”

The 1965-66 Football team were proud to be Cup Finalists and Championship Runners-Up. How smart they look here in their full kit. 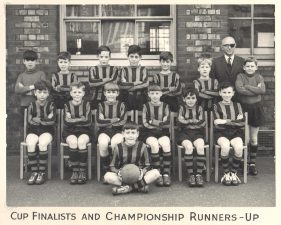 We have been very lucky to have lots of past pupils get in touch as the memories section of our website brings back fond times. A huge thank you to Rhoda Malloy (nee Critchley) for these memories “Mr Parkinson taught me in 1967, 1968 and 1969. He was an excellent teacher, firm but fair, with a very good sense of humour. He had a passion for the French language which he passed on to me, teaching his pupils how to construct simple sentences, how to count to 20 and many French songs that have stayed with me to this day – I have just turned sixty! This knowledge of a foreign language proved to be an invaluable boost to my self confidence when I passed the entrance exam to Birkenhead High School, as very few Primary schools taught French in those days. It became by far my favourite subject and I chose to study it at A level along with German and English. I firmly believe that it was due to my fabulous start with Mr Parkinson that I ended up getting an A in French in 1976. I continued to study French with Education at university and became a primary school teacher in Leeds, teaching Reception Class, plus Years 1, 2, 3 and 4, retiring early due to an accident, three years ago.
I will be forever grateful to Mersey Park Primary School for such a wonderful start to my education.”

Miss Storey’s class in 1968 had this class photograph taken. If you recognise yourself in this photograph please let us know! Thank you to Jan (Janet Dawson) who got in touch to say: “I’ve spotted myself on Miss Storey’s photo 1968. Middle row 1st on the left. I still have this photo and another one with the mayoress of Birkenhead with some of the netball team!” 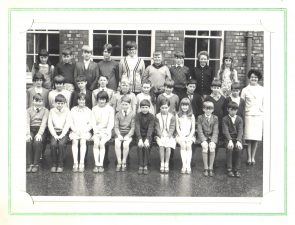 This class photograph was taken in 1969. If you recognise yourself in the photograph please let us know! We believe the teacher had the initials EP and this was an 11+ class. Thank you to Deborah Fraser who got in touch to say, “I attended Mersey Park in the sixties. The teacher E.P. was Mr Parkinson, he was my teacher. He used to cycle to school on a Raleigh bicycle and wore jackets with leather patches on the elbows. I remember him as a very kind man.”

Thank you also to Rhoda Malloy (nee Critchley) who wrote to say “despite living in the north of Scotland now, I heard about your search for past pupils’ memories – seeing the photograph taken in 1969, took me right back to the very happy times I had with my friends in school. I am unable to recall all the names of the children in the photo, but many have come back to me:
The 4 girls in the middle of the front row are Gail Gaskell (sleeveless, white blouse), Pauline Dodds (striped top), Sharon Hanley (red dress) and Deborah Benson (sleeveless, flowery dress).
I am on the second row, third from the left, wearing a maroon cardigan with my prefect badge on. Next to me is Janet Roach (red cardigan), Daphne Howard (yellow blouse), Kim Wade (flowery dress), Carol Bailey in black and white and the boy on the end wearing glasses is Brian Jones.
On the third row I remember Stephen Smeltzer, second from the left, next to Tarina Holland. Lesley Little is the tall girl in the yellow dress with white cardigan.
Far left on the back row is red-headed Larry Jones, the naughtiest boy in the class! Suzanne Beacall was third from the left, then Linda Chisholm. I think the tall boy may have been Anthony ……… Pauline Eccleston was next (cream cardigan with brown buttons, then Susan Jones. Lynne Evans, is second from the right.
When I first started school, my teacher was Mrs Audley for at least a couple of years and I also remember being in Mrs Bassnett’s class at some point.”

We believe these photographs of a French Club and trip to Paris were taken around this time. If you can give us any further information or anecdotes about this trip please get in touch!

Thank you to Julie Glover who got in touch to say, “I was present on the picture of the trip to Paris. We were accompanied by Mr Hooper and Miss Radford. Mr Hooper had lost an eye and an arm in World War 2. He was passionate about France and was our French teacher. I was a prefect and voted the first head girl of Mersey Park School. I enjoyed all of my time there.” 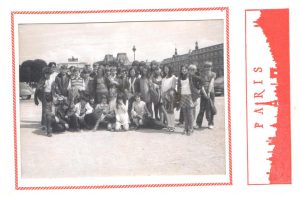 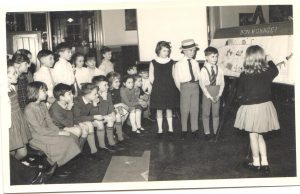 In 1970 the Girls Athletics team did particularly well and won this trophy. 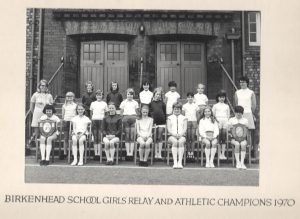 1971 was a successful year for sports at Mersey Park – both the Joint Rounders team and the Cricket team became champions. Thank you to Julie Glover who got in touch to say, “I was one of the rounders team on the 1971 picture I was left of the teacher on the right who was Miss Radford the other teacher on the left was Miss Pritchard.” 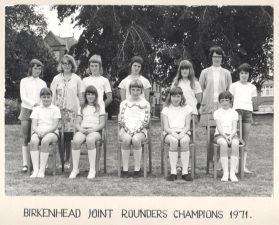 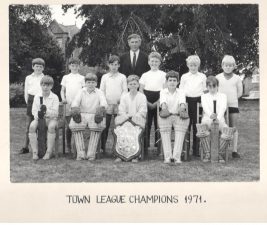